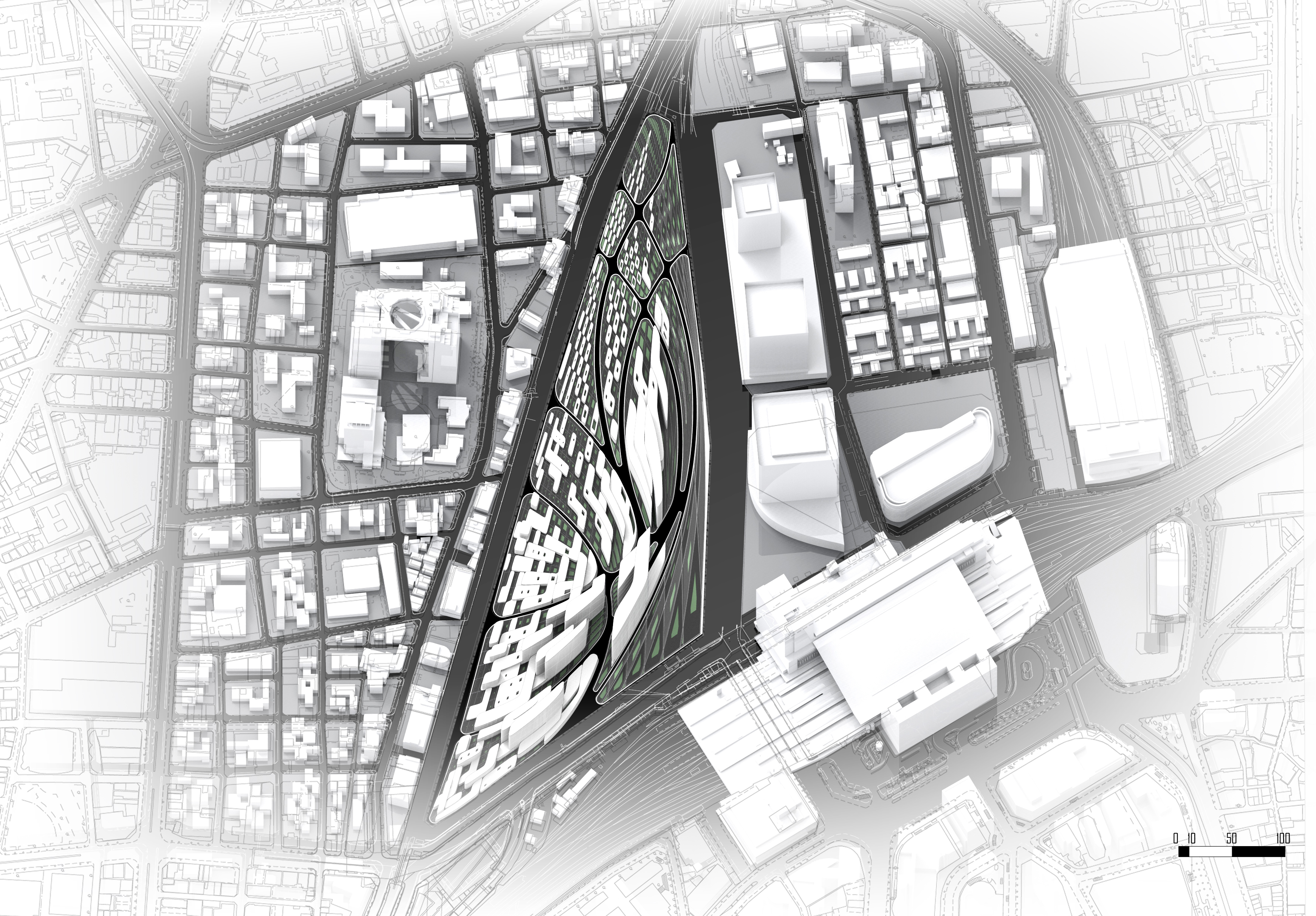 This invited competition entry proposes a Distinctive Urbanism, predicated on the design of unique and memorable spatial experiences. High density urbanism is mitigated with public green corridors and plazas, giving simultaneously a sense of openness within an intense metropolitan experience. Building typologies, and their heights and footprints, are adapted to a porous, pixelated organisation of open space to massing, and are differentiated to various potential programmatic scenarios. Flows on site move between, under and through building mass. Through the systemic correlation of massing, program and landscape, the proposed scheme is integrated within the infrastructural systems both at grade and below ground, merging with the existing urban fabric. Patterns and flows of these systems target their adaptation to the heterogeneous contextual conditions of Umekita Area. This distinct approach to urbanism projects an identifiable character for Umekita Area, as the Face of Osaka.

Multiple Futures
The contemporary city can be read as a pattern in time, shaped by the dynamic forces influencing it, and this proposal recognises the complexities of how cities are formed from a multitude of forces. The principle strategic objective of this proposal is to develop a manifold of possible future scenarios and configurations for the site, which can be adapted to diverging orientations of future investment models and planning considerations. Although one single design scheme is presented, this proposal is rather for an adaptive process of mediating towards multiple possible futures, each contingent on how economic, political, social and environmental considerations play out in the future. Six zoning scenarios, each outlining a varied mix of programmatic ratios, are deployed as instruments to yield six different diagrams of massing and open green spaces. The resultant diverse urban morphologies demonstrate the openness of this methodology to the contingencies which will shape the development of the Umekita area, in a second and more informed stage of design.

Open Green Space: Flows & Fields
A large part of the vast 7ha site is a top-side development above existing railway tracks. In our proposal, the site is subdivided by three site influences: a principle north-south and east west array of intersecting grid lines, splaying off the traffic plaza in the West Exist of Osaka station above the proposed JR Tokaido Line; and a set of grid lines associating to the small scale urban morphology to the west of the site. In addition, the existing and proposed pedestrian flows on the site, between the stations and the existing streets and plazas, bring forth a fourth, more fluid grid of pedestrian spaces, oriented to and from the various stations. These flows, generated from minimal paths between the main channels of pedestrian movement, oscillate between efficiency and redundancy of an intensely connected urbanism. Subdivision patterns are formed from the amalgamation of the various grids, and together create Moiré patterns of a differentiated urban field. Varied scales and types of extruded pixelated massing are contrasted with diverse lush greenspaces spaces with varied planting, material textures, and orientation. A series of schemes deploy built site area, public open spaces and private greenspaces in various relationships, serving as the lungs of high density urbanism.