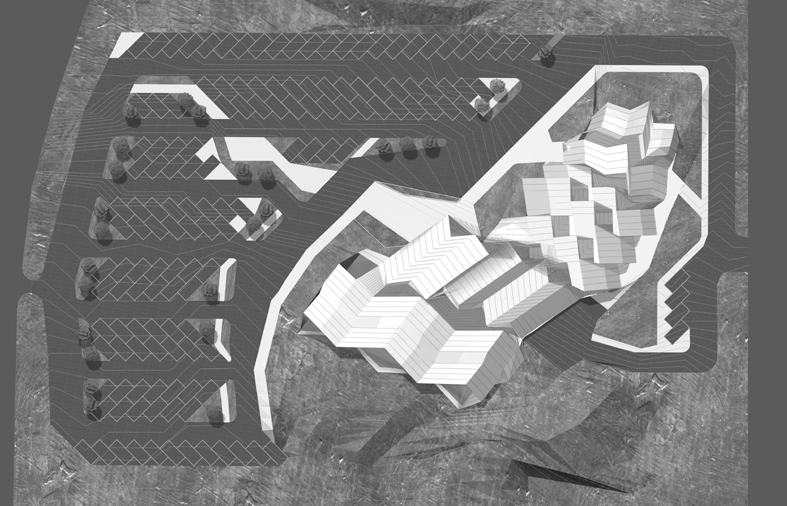 The FJCC is conceived as emergent from the figure of the fieldspace of the site.  Whilst thebuilding is distinctly disjunctive from the ground, the building is also continuously fused with the adjacent landscape. The project deploys two distinctly recognisable graphic/spatial systems for building and site.  One system can be engineered with a coherent logic of Metric Equivalence of 18’ structural steel members, as an ‘intelligent’ lattice of 18’  linear structural steel elements and scriptable point vertices, that do not change dimension but do change towards any vectorial direction in their junctions and orientations.  The angle and offset of the linear structural unit vary, while the length of structural steel members remain constant. The structural unit of 18 feet is proposed as a modelling tool for the spatial parameters of the building, as well as the extent of 18 x 9’ parking spaces on the site. The parking module is mediated to [e]merge with the figure of the building topography.  The parking landscape is inscribed with a regular repetitive pattern, which is the mediated to the singularities of the FJCC.  The other spatial system mediates adjacent geometrical conditions in a more pliant fusion.  The intermediate fusion geometry is deployed for the zones of fenestration in the roof of the FJCC.  The roofing and walls are fused into one coherent system of bands of stranded surfaces clad in metal sheet material of standard width.  The sectional enclosure bands slope differentially and iteratively to control the emanation of natural light from above.  The material divisions of the enclosure and the flooring continue to the external adjacent landscape, as articulations of hard and soft landscape surfaces.  As the building must be excavated, we have adopted a strategy of using the ‘cut’ earth to ‘fill’ the sloping adjacencies of the perimeter of the building, attenuating the effect of the building as an emergent condition within the landscape.